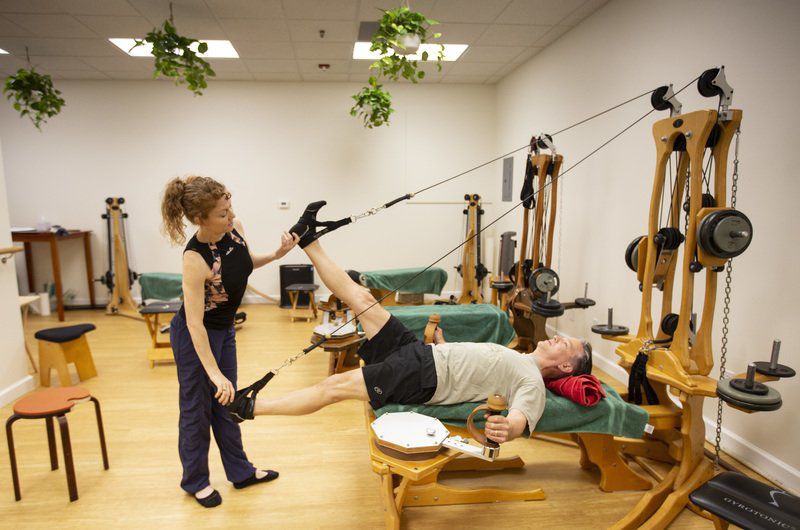 TRAVERSE CITY — If a wooden weight machine and yoga gave birth to an exercise system, gyrotonics would be it.

Mia Munroe brought the first gyrotonic studio to the area with Movement In Action. Her studio in Suite 205 at 148 E. Front St. features five wooden apparatus that utilize natural movement to strengthen the spine and build a strong core.

According to www.gyrotonic.com, “each movement flows into the next, allowing the joints to move through a natural range of motion without jarring or compression.”

“It allows me to move my spine with support,” Munroe said while using one of her three pulley towers. “It’s an economic, fluid movement. It’s all rotational, smooth, decompressive exercises. But it’s not just therapeutic. There have been some high-level athletes that use this.”

Dr. Dave Johnson, of Sleeping Bear Natural Health, said he decided to try the gyrotonic method after a brief introduction to the equipment. He said chronic back issues led him to a session at the studio on Monday.

Johnson said sedimentary lifestyles can lead to less flexion in the spine, and gyrotonics is a way to address it.

“These are more smooth, fluid, flowing movements,” Munroe said. “It allows me to move my spine with support.”

One thing gyrotonics is not is a typical workout experience, Munroe said.

The studio dedicated to gyrotonics and gyrokensis — a group class that works on movement without the equipment — is new to Traverse City. But the concept is not. Munroe said Bridgit Frank at Village Pilates has been teaching gyrotonics for six years on one of the pulley towers.

Munroe said Frank has sent clients to her studio and she has reciprocated the effort.

“I couldn’t ask for a more welcoming colleague,” Munroe said. “She has been so supportive.”

Munroe, who worked as a professional ballet dancer for 10 years, said she was first exposed to gyrotonics in New York City in the early 1990s.

“I knew right away that this was worth it,” she said. “It made me feel as strong as I was when I was a professional dancer. It’s so sustaining.”

Munroe was exposed to gyrotonics again around a number of years later and started gathering the necessary equipment.

“This is a special collection of originally-made equipment,” she said. “I’ve been hoarding it for years.”

Munroe said she worked as a teacher/trainer on both coasts and in Florida before returning to her native Michigan and opening the studio on June 1. Munroe said worldwide there are more than 7,000 studios and 150 teacher/trainers.

Munroe said gyrotonics has applications in rotational sports like golf on the pulley towers, as well as an emphasis on knee health — with sports like hockey — on the extension machines.

“I am a new membership model,” Munroe said. “The most effective way to understand this system is to be consistent initially; whether you do it one month as a spinal consult or whether you decide this will be a daily workout three times a week to support any other athletic lifestyle.”

To help introduce the method to the masses, Munroe held an open house on June 1 that drew a dozen people. Other open houses are scheduled for June 15 and 22 from 2-5 p.m.

© 2020 Movement In Action | All Rights Reserved